Why Sicily is the Best Place to Visit in the Spring

Sicily is, undoubtedly, a beautiful city. No matter the season. However, in the spring, it’s absolutely gorgeous. The temperature is warm. It’s less costly to travel during this time too. There are flowers blooming everywhere and there are fewer tourists than there are in the summer.

And the food during this time is amazing too. At the farmer’s market, you can expect fruits and vegetables like cherries, pears, strawberries, kiwi, apples, clementines, melons, peaches, zucchini, peppers, peas, green beans and more.

You can even go to the beach in the spring! With Sicily being an island, there are many to choose from. However during this time most people choose to go to the rocky beaches or take a walk on the boardwalk with gelato in one hand and a perfect breeze flowing through the other. My favorite beach to go to was this rocky beach in Taormina, I remember spending the day going in and out of the wave pool and walking along the beach looking for the prettiest pebbles. Then we would all eat a lunch that we brought. A popular spring option being a cold rice dish with various vegetables mixed in. CLICK HERE for the recipe. It would be a sin to not share such a beautiful creation. And of course, polpette di pollo, which translates literally to “chicken meatballs,” which sounds amazing to say the least and it is! Interesting food choices for the beach maybe, but it just works somehow. 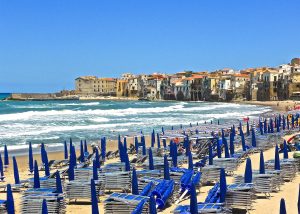 However, there’s no getting in the water after eating until two hours later, because you will get “mal di pancia” (stomach ache) if you do. 😉 At first I thought that this rule was a bit much, but then I saw how much food people brought to the beach and it made sense. I think that’s the reason why whole day trips to the beach started because half of the time you’re there you’re waiting to do the the one thing you came to do at the beach: swim. And a word of advice, do not argue with a Sicilian grandma about this; because you will lose. 🤣👵🏼

Going to the beach in the spring is the only time you’ll see me there. Not because it’s not beautiful in the summer, but because my abnormally pale complexion would suffer third degree burns if I were to go during summer. Besides, it’s just more peaceful. In the summer it’s crowded, loud and way too hot. Even the water gets hot, basically turning into a warm pool of sweat, tanning oil, and other fluids I won’t mention.

Another great thing to do in the spring is to visit our active volcano Mount Etna. I used to live right below her and got to see many of her lava flows, which in the beginning seemed like the most amazing thing but to the natives it was as boring and mundane just like seeing a cloud in the sky. Going on mount Etna in the spring weather would just have the most gorgeous view and the ski lift tour would be open as well. If you like taking pictures this was the place for some beautiful shots. You have a better chance of getting an aesthetically pleasing picture in the spring than most other seasons.

Another great thing about spring in Sicily is Easter. The Cathedrals are always a beautiful thing to visit when

going to this island, especially during Easter. There are many religious traditions that take place, mostly because the majority of people living there are Catholic. Even if you’re not, everyone still participates because it’s not even about religion. It has become a part of their culture. I remember when I was in 6th grade we would have a few days off of school so that we could go in the streets and pull a long rope attached to a carriage holding a statue of a saint all around the town for Easter.

There are usually many plays happening in the towns as well during this time, re-enacting a scene from the bible, along with orchestras or even just drums. And of course, the seasonal spring dessert. They make this wonderful ricotta filled cake with candied fruit inside, called cassata. You’ll find this at every Sicilian grandma’s kitchen table on Easter. 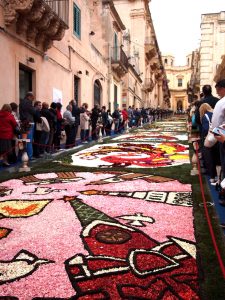 Lastly, an absolute must if you ever get the opportunity to go to Sicily in the spring, is to go the the flower festival in Noto. Groups of young artists use millions of flower petals that they place on the ground in the street making tons of multicolored designs. This street art began as a way to celebrate Corpus Christi, which is why it is celebrated near Easter.

It’s a beautiful experience to visit Sicily in the spring and it’s inspiring to watch the community come together to act out scenes or make art and share it with their community. Seeing it happen is unforgettable.